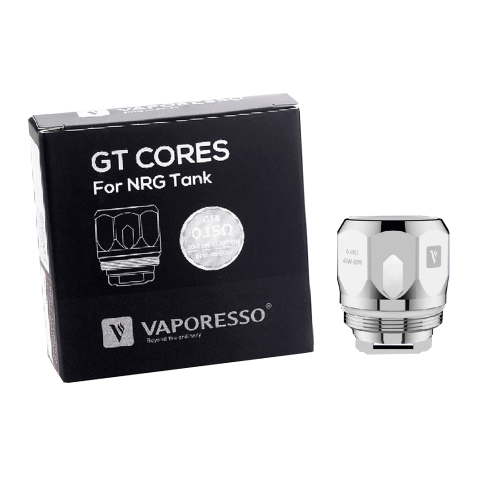 +7 Drops
Trustpilot
Vaporesso GT2 Coil clocks in at 0.4ohm resistance, a brilliant range for emitting large clouds, though never at the cost of flavour.
3 item(s) in stock

Vaporesso's new NRG tank is one of the most powerful tanks to hit the market in recent years. Clearly having taken some inspiration from SMOK's TFV8, the NRG tank is bulky, sturdy and capable of releasing massive amounts of vapor. Of course, this is thanks to Vaporesso's coil system; the GT range.

This particular variant, the GT2, clocks in at 0.4ohm resistance, a brilliant range for emitting large clouds, though never at the cost of flavour. The GT series is available in both traditional cotton, and Vaporesso's signature CCELL ceramics.

Vaporesso is one of the world’s leading vape brands, and for good reason. They’ve perfected the art of making high-quality vape products such as coils, tanks and vape devices at impressively budget-friendly prices. Headquartered in China, Vaporesso boasts of a robust, 500-member research division that has raked in more than 300 patents while developing cutting-edge electronics for their mods and vape kits.

Even though the brand launched in 2015, they’ve had a meteoric rise to the top, thanks to their commitment to offering the best. Vaporesso is fully devoted to ensuring the highest standards of safety and compliance when manufacturing each of their products.